Our conferences provide the opportunity to hear the latest research in energy economics and dialogue that takes place between industry, government and academia. USAEE meets nationally on an annual basis, with more frequent regional chapter meetings. Don't miss your opportunity to present your research and learn from others.
Energy Economics Education Database
IAEE Summer School and Co-Branded Events
Donate to Student Scholarship Fund

There are many benefits to being a student member in USAEE. Student members as well as regular members gain a broader understanding of energy economics, policymaking and theory.
Join / Renew
Code of Conduct
Sustaining Membership
Membership Benefits
Member Directory
USAEE Salary Survey

Membership in USAEE is open to anyone in the United States who has an active interest in the fields of energy or energy economics. Our membership consists of those working in both the public and private sectors including government, academia and business.
Dialogues
Energy Journal
Economics of Energy & Environmental Policy
Working Paper Series
USAEE Salary Survey
Advertising Rates

USAEE prides itself as being a place where energy economic professionals can quickly learn about the literature and people sources in every subfield of the profession. Avail yourself of two professional journals & a quarterly newsletter.
Registration Fee Scholarships
Paper Awards
Poster Awards
Job Market
Student Definition
Young Professional Definition

Keep in touch with USAEE and Energy Economics issues through news and social media.

» About Us » Member News

Dr. Joseph M. Dukert, a longtime member of the International Association for Energy Economics (IAEE), Senior Fellow and Past President of the United States Association for Energy Economics (USAEE) & past Vice President for Conferences and Vice President Chapter Liaison of the USAEE and stalwart member and leader of the National Capital Area Chapter, died on February 5, 2020, to the grief of many friends and admirers across the energy specialties and industries. Joe was the archetype of "a gentleman and a scholar." Few could claim more credibly to have been a life-long student, as Joe graduated from Notre Dame magna cum laude in 1951, and capped his formal education with a PhD from Johns Hopkins School of Advanced International Studies 54 years later in 2005, with various other graduate programs and degrees in between. Few could claim to have amassed more knowledge and understanding of the energy sector, summarized in Joe's final of multiple books, for the Greenwood Press, simply titled "Energy." Few could claim to have traveled so widely, to have been invited to membership in the Cosmos Club, to have learned Spanish well enough to write a dissertation on the Mexican energy sector from original sources, to have been a five-time editor in chief of the Department of Energy's annual National Energy Policy Plans, to have served as an officer in the Air Force, to have been a ten-year member of the State Department's Advisory Panels on Oceans, Environment, Science & Technology and on Antarctica, to have been Chairman of the Republican Party for the State of Maryland, or to have worked on the original Vanguard rocket as an executive with the Martin Company. Joe could have made such claims, but he was too modest to do so, and many longtime friends and colleagues may only be learning of these distinctions from this obituary, as has its author. Joe is survived by his wife Betty, herself a paragon of graciousness and accomplishment as the multi-decade executive for NBC of its "Meet the Press," putting her in direct contact with the top leaders of the 20th Century. The IAEE, the broader energy community, and intellectually-engaged people everywhere have suffered a serious loss in the passing of Joe Dukert. 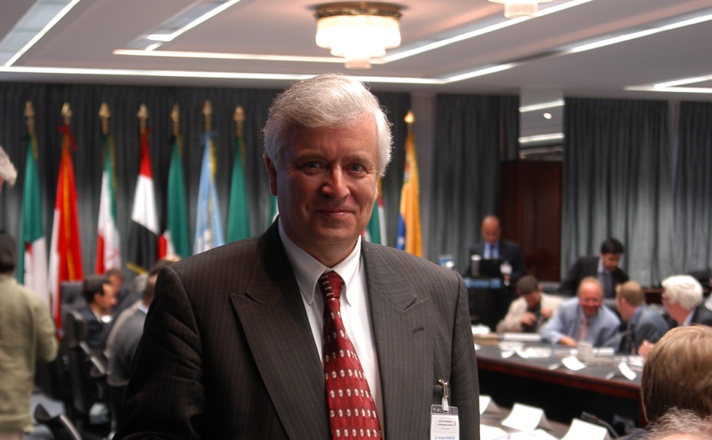 The field of energy economics mourns the passing of one of it's most prominent members Herman Franssen who passed away on January 26, 2020 in Mexico City.

Dr Franssen, 80, was a long-time active member of the IAEE and a frequent speaker at energy conferences around the world. Dr Franssen came to the United States from his native country, the Netherlands. He went on to receive degrees from Macalester College (BA) in Minnesota and an MA and PhD from the Fletcher School of Law and Diplomacy at Tufts University in Boston.

He was the Executive Director of the publishing firm Energy Intelligence and the organizer of the highly regarded Oil and Money Conference for nearly 40 years. Dr. Franssen was a frequent participant in many IAEE and USAEE events. He began his international energy analytical career with a major study for the Congressional Research Service and then joined the newly created Department of Energy in 1978 as Director of Oil Market Analysis in the Office of International Affairs. Herman became the Chief Economist at the International Energy Agency in Paris in 1980 where he coordinated the IEA's first major World Energy Outlook in 1983.

Dr. Franssen served as senior economic adviser to Oman's Minister of Petroleum and Minerals from 1985 to1996. He returned to the USA and established his own consulting firm, International Energy Associates. In addition to his role at Energy Intelligence, Herman was affiliated with the Center for Strategic and International Studies, the Middle East Institute and FGE Energy.

Herman, a devoted family man, is survived by his loving wife of more than 50 years, Maureen, two daughters, Michelle and Lynn and 4 grandchildren. He will be deeply missed by his family and his many friends and colleagues.